Most end of year write-ups that I’ve seen look back at 2016 and remind us of all the terrible things that happened in the last 12 months. A lot of terrible things did happen but I want to write something more positive. I want to pay tribute to WakingTheFeminists and all they achieved last year. 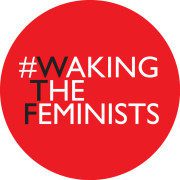 WakingTheFeminists had their final public meeting on November 14th 2016, back in the Abbey Theatre one year later. I missed all the previous meetings so I was determined to make it along to this one, and I’m so glad I did. It was less than a week after the US elections, Trump’s surprise victory was still a fresh wound and this was a comforting balm. It was hopeful and inspiring. The thing that came up again and again was “look what we can do when we work together”. There was a feeling of solidarity in the room. It was powerful.

The videos are online and they are really worth a watch it you haven’t seen them already. Just check out the list of speakers! (If you don’t have the time to sit in front of the videos, maybe convert them into mp3 and pretend it’s a podcast.) There was a great mix of speakers – young and old, men, women, and gender discombobulists. Feminism is often criticised for being a women’s issue, though the aim is always equality for all. WakingTheFeminists got lots of men talking about feminism, opening their eyes to sexism and making them want to do something about it. (Loughlin Deegan’s speech at the Abbey’s Theatre of Change last year describes this eye-opening very well. It seems to have disappeared from the WTF website but you can watch it here from 14 min 10 seconds) It seemed fitting that one year later the conversation opened up to include male voices. 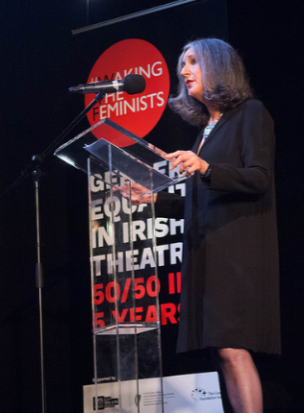 Archivist Catriona Crowe spoke about the history of Irish feminism, and how there’s always two strands – the restrained and the noisy. During the campaign for suffrage in the early 1900s, there was the peaceful struggle for reform – the tedious work of lobbying and bill writing – and also the noisy struggle, which included genteel window-breaking with toffee hammers! She credited WakingTheFeminists with uniting these two aspects of feminism – the public meeting provided the noise that was then followed up by a lot of research and evidence-based findings. (The preliminary findings of the long-term research project were also presented at the meeting and are available here.) She said that it was a great example of grass-roots feminism and it has provided a template for future movements.

WakingTheFeminists however have made some big changes happen this year. The Abbey Theatre set up a Gender Equality Committee and developed a set of guiding principles on Gender Equality, placing Ireland at the forefront of gender equality in theatre. The movement won awards and was recognised globally. It was awarded funding to carry out research and address gender discrimination. For the first time, the Gate Theatre will have a female Artistic Director. As a result of WakingTheFeminists, organisations are measuring, noticing and making changes around gender equality. There’s a different feeling in the community. People are talking and feel able to talk about their experiences. WakingTheFeminists brought people together, it gave them a voice because it showed them that they were not alone; they were not the only ones who felt like this or had experienced that. Most importantly it put those people in a room together. The strength of feeling was made clear in the room, and the support – you know people are on your side when you can hear their applause, their gasps and laughter. That connection is important and resulted in other conversations happening as people bumped into friends and started making plans. One of the off-shoots of last year’s meetings was the establishment of MAMs (Mothers, Artists, Markers).

Once again, the inspirational Sarah Durcan was the final speaker. She made the point that theatre is not life and death, unlike the social issues that many women in our society face. But, she said theatre shapes narratives. It is important. The US election showed us how important stories can be, how they shape the political landscape, how they can change society. We need to tell better stories. In that way, theatre can help shape a better world. To finish, the wonderful Camille O’Sullivan sang Leonard Cohen’s ‘Anthem’ and brought this inspiring meeting to a close

Change is possible. That’s the big lesson I learnt from WakingTheFeminists. Change is possible. You don’t have to accept things the way they are. In a world that seems to be getting darker and scarier, with the rise of far-right parties across Europe, the fall out of the war in Syria, the refugee crisis and the growing homelessness crisis, it’s important to have that reminder. We can do something about this, we have the power to make things better, we can do it together.