I’m a little late with this but I believe in celebrating the full Twelve Days of Christmas, and this is a Christmassy activity so I feel it’s ok to do it up until Jan 6th. (And yes, maybe I’m just making excuses. My next piece is about new year’s resolutions and I probably won’t get that one online until February. And then I’ll tell you that January doesn’t really count and all sensible people start their new year’s resolutions a month late.)

This is not a year in review post, or an attempt at a Best of. It’s a personal look back at the last year and the art, events and moments that I enjoyed.

Favourite book: This year I read and loved Station Eleven by Emily St. John Mandel. It a gripping novel set after a flu-like epidemic wipes out most of the world’s population. It’s not told linearly and frequently flashed back to before the pandemic so you see the characters in the world as we know it right now, and then see how they are surviving in the new world. It’s full of ideas about art and how to find meaning in life and how to be happy, but it’s also a pacy page-turner. I like the world she created and the large cast of characters that inhabited it.

I also really enjoyed Crudo which actually came out in 2018. It’s a fictionalised version of Kathy Acker’s summer of 2017, written in “real time” by Olivia Laing. I loved Laing’s Lonely City, and really liked this book despite not really knowing who Katy Acker is. It’s also about making sense of life and your place in the world. It references so many news events that I had completely forgotten about and reminds me that 2017 was a crazy year that was then followed by a crazier one. It also made me want to read more of Acker’s writing, as well as Laing’s.

Favourite non-fiction: I don’t read a lot of non-fiction and I wanted to include this category so I could mention Notes to Self by Emilie Pine. It’s such a wonderful book. It manages to cover so many of the struggles of being alive, and so much of that is difficult and heart-breaking. It’s a book about all the things we don’t talk about but the writing is so clear and concise that it brings you into an understanding with the writer. It’s beautiful and it will break your heart and crack open your brain – in a good way, a very good way.

Favourite tv show: I’ve already written quite a few posts about television that I love, some of which I watched this year and some I didn’t. Two wonderful shows that were definitely part of my 2018, and I hope will turn up again in 2019, were Derry Girls and Killing Eve.

Derry Girls is made by Channel 4 and is about school-girls in Derry in the late 1990s. It’s has a bit of the nostalgia factor (though I was a teenager then too and it often feels like it was only 5 or 10 years ago.) but it doesn’t rely on it. Just as it doesn’t rely on the Troubles to provide either drama or jokes. Both of these things add flavour but the show is really about negotiating life as a teenager – school, parties, parents, etc. It’s very funny and the entire cast are brilliant. Some of the funniest scenes are with with Erin’s parents and grandad. I’m looking forward to the second series.

I’m also looking forward to the second series of Killing Eve, the show with Sandra Oh’s government agent chasing Jodie Comer’s assassin across Europe. Although it is adapted from a series of novellas by Luke Jennings, the writing has Phoebe Waller-Bridge fingerprints all over it and I love that about it. I’m a little bit nervous that she will not be writing the second series, but Emerald Fennell seems like a good fit.

Favourite theatre show: I saw a lot of great theatre in 2018, most of it in Dublin but a bit in Galway as well. It’s very hard to pick my favourite thing so I’m going to cheat and pick something recent but has been touring for ages.

At the end of November, I finally saw Mikel Murfi’s two one-man shows The Man in The Woman’s Shoes and I Hear You and Rejoice on consecutive nights in Axis Ballymun. I Hear You and Rejoice was my favourite by a whisper. I loved the format of the show and how it developed the story that started in The Man in the Woman’s Shoes. I cried three or four times throughout the show but I also laughed uproariously. Mikel Murfi is such a joy to watch; his ability to create whole worlds and elaborate soundscapes is incredible, and Pat Farnan is such a lovely character that it’s a pleasure and a privilege to spend time in his head.

Other favourites include The Gloria Tapes, which I really hope gets another run because I want to send everyone I know to go and see it, and the fabulous Where We Live festival, organised by Thisisipopbaby as part of the St. Patrick’s Day festival. It brightened up my March and I spent a lot of time in The Complex seeing really interesting shows.

Favourite protest: This is another crowded category because there were some great protests this year. Early in the year there was the I Believe Her/Sue Me Paddy protests following the Belfast rape trial which I think were a reflection of the very strong feelings people had about that trial and how it was conducted. The post-referendum March for Choice was pretty special, and in the lead-up to the referendum Radical Queers Resist repeatedly turning up and covering disturbing images outside maternity hospitals were pure brilliance and made me cry on more than one occasion.

However, my favourite and most memorable protest was the Stand 4 Truth Rally on the Sunday of the Pope’s visit. It was organised by Colm O’Gorman from Amnesty Ireland (with help from loads of brilliant people) and featured music and poetry and speakers. It was an acknowledge of the harm done by the Catholic Church in this country and included a silent walk to the former Magdalen Laundry on Sean McDermott Street. It was incredibly moving, the crowd was really diverse and I’ve never experienced anything like that silent walk. For me, it was the perfect way to demonstrate how Ireland has changed since the last Pope’s visit.

Personal Achievement of 2018: In September 2015, I set up the ABC Dining Club. For the last three years we have been eating our way through the alphabet and this year we finally completed it. The aim was to go for dinner once a month, but to choose the restaurants alphabetical. We started in Acapulco on George’s St and finished with a bumper WXYZ day in June 2018. (In one day, we ate in White Friar Grill, Xico, Yamamori and Zaytoon.) Completing the alphabet took us a little longer than intended but we ate a lot of excellent meals and had a great time doing it. I feel a sense of accomplishment for having finished the entire alphabet but I’m also sorry it’s over and I’m thinking about setting up the XYZ Dining Club to do it all again backwards, without any repeats, though I’m not sure there’s another X restaurant in Dublin.

National Achievement of 2018: Obviously it couldn’t be anything but Repealing the 8th Amendment, and getting the legislation passed and ready to go on January 1st 2019. Repeal didn’t just happen in 2018. The referendum was the culmination of many, many years work, and while what we have isn’t perfect, it’s better than what we had this time last year. Full reproductive rights are still a work in progress but they took a leap forward in 2018.

How I will remember the year: It was a year of extreme weather. From the two days of snow that shut down the country at the beginning of March, and more heavy snow the day after St. Patrick’s Day to the incredible dry, hot summer which resulted in drought and water-restrictions. Was it a one off or is this extreme weather going to be our new normal? 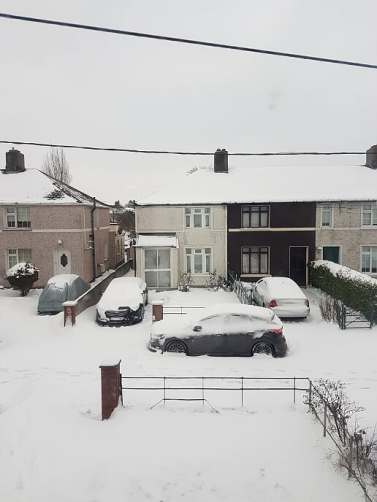 Something I wish I’d done more of: Blogging and writing in general. I’ve had fun writing some fairly silly things for this blog over the last few weeks and I hope to do more of that in the next weeks and months.

Something I wish I’d done less of: Stressing out about the referendum result. I know all the worry and stress were necessary to get us the strong Yes vote that I wanted and only half-believed in. The fear of a No vote was a huge motivating factor in getting people out canvassing and having conversations. But I still wish that I had been able to have more faith in the Irish voters, it would have been a less anxious few months.

Minor discovery of the year: I recently started using Ultrabland cleanser from Lush and I love it. I wrote about trying to use less plastic at the beginning of the year and how much I loved Lush’s recyclable pots. I didn’t know they did a cleanser and I’ve been feeling guilty for my reliance on No. 7 hot cloth cleanser which is comes in a giant plastic dispenser. I’ve found Ultrabland to be an excellent replacement. And you can take it on holiday – I recently got it through airport security, not in the tiny liquids bag, but as non-liquid in my general hand-luggage!