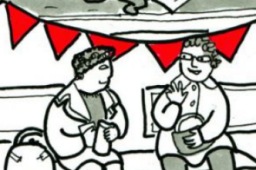 Devoted and Disgruntled is an annual Open Space meeting for theatre artists, organised by Improbable in London. At a D&D meeting in January 2013, Stella Duffy raised the topic of doing something to mark Joan Littlewood’s centenary in October 2014. That idea led to a session at the meeting, a few emails and tweets were sent out and it started to grow. It kept growing and growing to become Fun Palaces, a weekend of community based artistic endeavours, held in more than 130 locations all over the United Kingdom and in France, Iceland and Belgium. (How Did Fun Palaces Begin? blog post by Stella Duffy.)

Joan Littlewood, a theatre maker and director in the 1950s and 60s, is probably most well-known for the satirical musical O, What a Lovely War She was also part of an ensemble company, the Theatre Workshop which was a travelling troupe before taking up permanent residence at Stratford East. Their work was left-wing; one of their most famous productions was the British premiere of Bertolt Brecht’s Mother Courage and Her Children in 1955 and they also championed the work of Brendan Behan. Littlewood was also fiercely interested in community theatre as well as political theatre and wanted to create a theatre of the people, bringing theatre to the streets. In 1961, Joan Littlewood and Cedric Price designed the Fun Palace – a ‘laboratory of fun’ but it never came into being.

For 2014 the Fun Palaces had the tagline “Everyone an artist, Everyone a scientist.” The aim was to bring people from different disciplines together, but more importantly to bring the community into the work. Everyone is welcome, everything is free and a special effort is made to get children involved.

Technology played a big part in getting the 2014 Fun Palaces up and running, in a way that was not possible in 1961. Twitter, email and the internet allowed people to connect with each other, to feel like they were part of a larger community, to find help, advice and encouragement. Despite all the online communication, the work really happened in the individual communities where each Fun Palace was created. There were no boxes to tick or rules to follow so each palace could make whatever it wanted, based on their resources and what their community needed. This resulted in a diverse selection of events. On the website you can search for Fun Palaces under tags such as mermaids, tea, hat-making, dog-walking, robots and much more. I watched the whole thing unfold on Twitter and found it incredibly exciting. I’m sure those we attended or organised events had a fantastic time. It seems like another theme of the weekend was that anyone can make art – there were lots of free workshops and events – and that anyone can run an event, and anyone can change the world in some small way!

The Fun Palaces success story shows what can come from someone having a good idea, sharing it with someone else and allowing that idea growing into something real. I know that’s how everything happens but because I follow Stella Duffy on twitter, I got to see this idea grow in real time and not just see the end result. I also really like the combination between technology and global engagement and the work that was done in local communities. People engaged with the idea and took ownership of it. It would be great to see a Fun Palace in Dublin next year. It might also be a model to follow for the 1916 commemorations next year, a way to engage local communities around the country in building something meaningful in their own community.

One thought on “Fun Palaces”